Even if all her career has been built in the industry, Claire MONNET had to assume several jobs before becoming Purchasing & Sales Management Director at ACIMEX. Ten years after integrating the ACIMEX team, the lifting and handling of heavy loads using vacuum technology is no longer a secret to her.
Focus on the professional career of a woman who prefers the agitation of a workshop to the calm atmosphere of an administrative office. 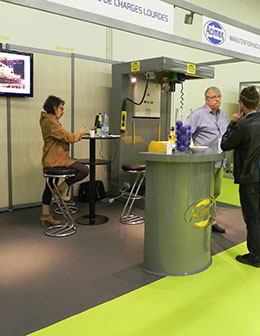 What is your career history ? When and how did you arrive in the lifting industry ?

My professional career is rich, I started out as Export Assistant and after several years, I took a different direction, towards Marketing, to eventually end up working in Purchasing. I had several opportunities to train while learning in the field at the same time.
After several years spent within an international group of 500 employees, where I was Multisites Purchasing Manager for a range of chemical products, I had the opportunity to leave. The group was sold to its competitor and Purchasing Services merged. I also began to work as a freelance with different companies such as MECA VEGA and ACIMEX.

You are now Purchasing and Sales Management Director, what is your job about ?

The job was created over the years and after several company evolutions : nothing like this existed at first. I arrived at ACIMEX in 2010 as a freelance worker, I was in charge of sales and prospection.
In 2012, I integrated the team because the offices were about to be moved from Torcy (77) to Saint-Avertin (37). I worked with the staff to find a proper solution for each employee, mixing professional and personal issues.
Some colleagues didn’t follow the move from one region to another, and I had to take on the Sales Management job 6 months before we moved. I was navigating between the Saint-Avertin site and the Torcy one during this period, and I even managed the physical move of the offices. The new offices in Saint-Avertin were finished in July 2012, we moved in and I naturally joined in, following the Sales Management job I had started early on.

What has been your evolution within the company ?

There was a lot to do, we had started using the ERP software only 2 years before to organize the company ; there was little data and history in writing, everything had been done orally before. We had to pull the structure out of an oral-operating mode, with direct instructions from one person to the other. Fortunately, the company was very small, and it was very easy to communicate.
Over time, we brought change with the launch of QHSE, changed our communications, structured the marketing offer with a new website, modified the process in the workshop and improved conception. We gave ACIMEX new ambitions and a business strategy.
I went through these evolutions. Indeed, I worked on communications, the website and its SEO ; commercial prospection and our different attempts of sales representation ; I implemented Quality at ACIMEX with the help of an external provider ; I created a real Sales Management job out of a secretarial position which was at the time linked to the Site Manager ; and finally, the Purchasing position was created lately to optimize this function, to reduce costs and to increase our suppliers panel.

What is or what are the project/s you’re the most proud of ? And why ?

I’m quite proud of the work we accomplished with QHSE, because it was a real project on which we failed at first, 2 or 3 times, because I had a negative idea of all this. I didn’t have the choice, I had to pass certification and I wasn’t enthusiastic at all. But eventually, I found the subject to be quite clever, and it totally changed my point of vue on the matter.

What do you like and what motivates you in such a male-industry sector?

What I like about Industry is its concreteness, the manufacturing, the people who create and transform : these are the genuine added value of the company, as well as the people who conceive the machines.
I like the noise, the smells and the tingling of a workshop. It would be very difficult for me to work in the insurance, bank or IT sector.

How do you envision the future for ACIMEX ?

I think the future for ACIMEX will be written by an other generation. Everyone adds their stone to the building, and as such, Edouard Ferreira (ACIMEX General Director) largely contributed to the company’s History.

ACIMEX, the expert in heavy handling, can work with you on your projects. Please contact us at This email address is being protected from spambots. You need JavaScript enabled to view it. or ask us for a quote.